THE COOLEST LUNCHBOXES THROUGH THE AGES

THE COOLEST LUNCHBOXES THROUGH THE AGES

The lunchbox is the classic symbol of happy childhood memories. Nearly everybody has carried one at some point in his or her lifetime, filled with sandwiches, sides, and juice boxes — all the fixings of hopefully healthy and delicious lunches.

Since the original rendition of the modern-day lunchbox in the early 1900s, this American staple has taken many forms and born many images, often representing pop culture and social trends of the era. From cartoon characters to iconic and relevant imagery, lunchboxes have since been a subtle reflection of contemporary culture.

Interestingly, though, the concept of the lunchbox did not originate in the twentieth century. Decades prior to this first version of the lunchbox we know today, a simpler lunch pail was carried — a cylindrical metal container used to transport food for a midday meal. This initial lunch pail was originally considered to be a symbol of low socioeconomic status; those who could afford the time and money necessary to eat a proper lunch would not need such a container. Additionally, these lunch boxes were often fashioned from old tobacco boxes.

However, as the lunchbox developed over time to be a far more practical and socially acceptable tool, it came to embody all that was popular at the time. The monetization of lunchbox-cover imagery hit its stride in the 1950s, when a company called Aladdin emerged, capitalizing on the mass-production of lunchboxes.

Here we take a look at a variety of lunchboxes throughout history, and highlight just how they’ve evolved — and how they’ve stayed the same — in both shape and design over the decades. Inherently, in doing so we also take a look at how pop culture and mass consumption of popular television characters has shifted. 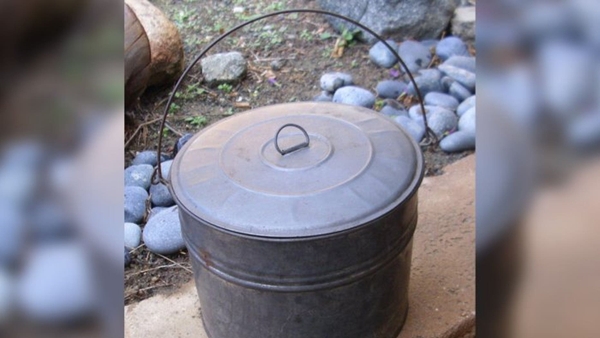 The origins of the lunchbox, specifically those metal boxes outfitted in pop-culture references from Mickey Mouse to Lost in Space, can be traced back to the metal pales that mill workers and coal miners would carry with them to work each day in the late nineteenth century. The sturdy, metal tobacco boxes were an ideal way to protect your lunch from the rugged, workplace environment. 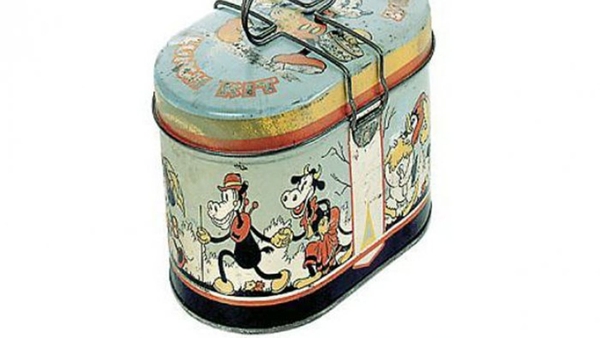 It wasn’t until 1935, when Mickey Mouse got his first starring appearance on a lunchbox, that the first pop-culture figure was depicted on a lunchbox. By the 1950s, executives at Aladdin realized the potential of these metal lunchboxes adorned with popular cartoons, celebrities, and pop-culture icons to become a cultural phenomenon among school-aged children. 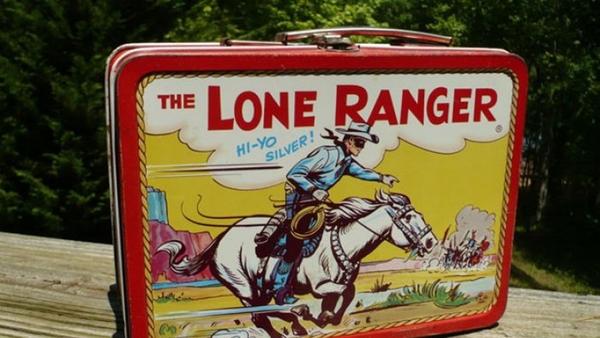 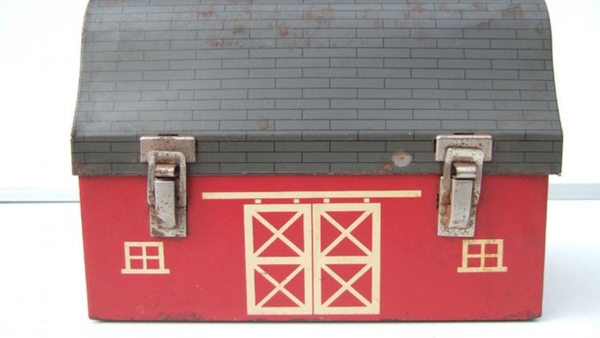 The rounded top of the red barn lunchbox that would be rereleased over the next decade, looks more similar to the classic worker pales and lunchboxes carried to factories and mines in the 1920s, only with a colorful barn scene added. 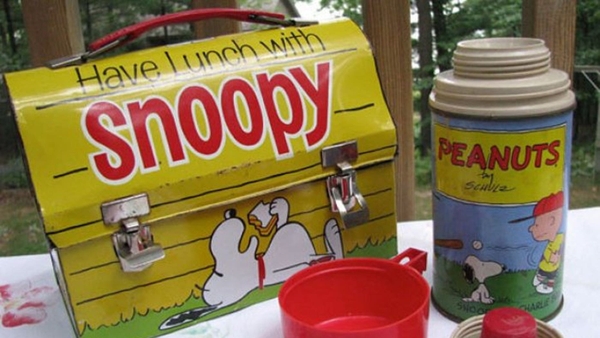 Also popular in the 1950s was the timeless group of Charlie Brown characters, particularly Snoopy. This matching Snoopy box and thermos provided the perfect way to transport both food and drink away from home.

6. Lunching with the Beatles 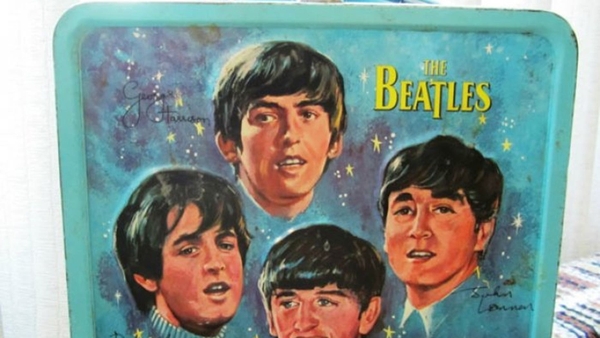 No pop culture discussion would be complete without mention of The Beatles, and lunchboxes are no exception — seen here is a box from the 1960s, bearing the famous foursome’s images. 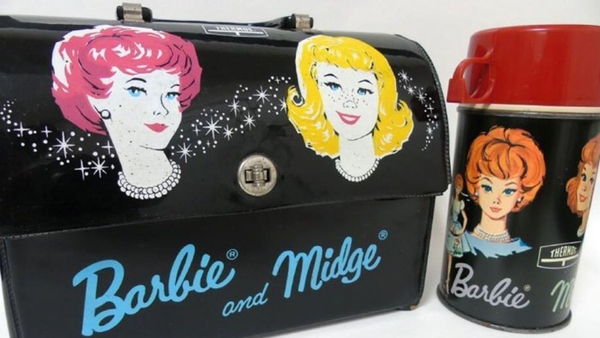 Barbie was released in 1957 and immediately became a pop-culture icon as one of the most advertised toys on the market. This black, vinyl lunchbox by Thermos marks a slight deviation from metal lunchboxes that dominated this era. 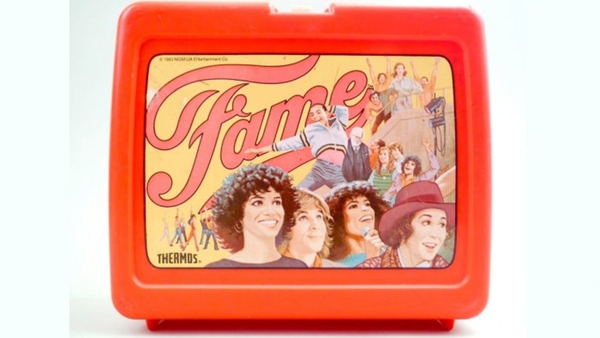 It wasn’t until molded plastic in the 1980s that lunchboxes saw a major redesign. The classic metal designs remained, but the hard plastic boxes with plastic thermoses became increasingly popular. 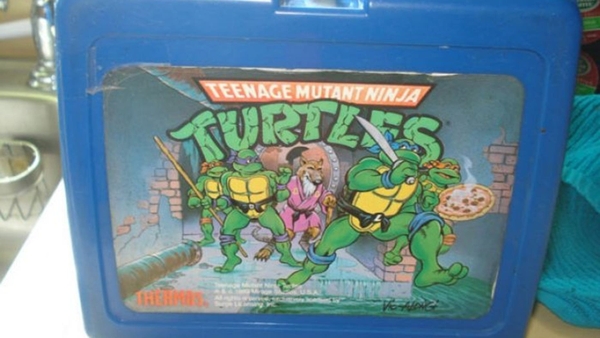 One of the most iconic boxes of the 1990s bears a classic image of the beloved cartoon show "Teenage Mutant Ninja Turtles." 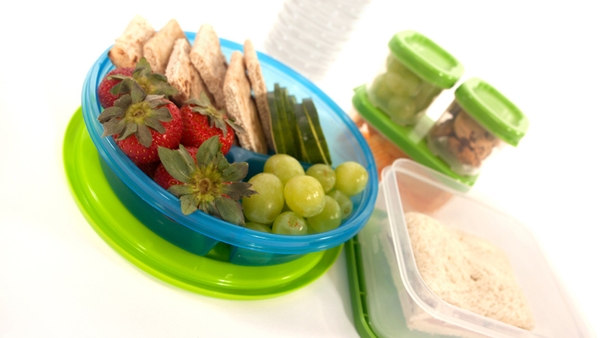 Today, much of the focus of commercial products is on efficiency and practicality — this simple lunchbox highlights this trend, keeping the entertainment value low, but the efficiency level high.